The FBI Violent Crime Task Force and Savannah-Chatham Metropolitan Police investigators have released photos of a man who tried to rob the Carver State Bank branch on Skidaway Road this past Friday, and are asking the public to help identify and locate him.

At about 10:30 a.m. officers responded to reports of a man armed with a pistol attempting to enter the branch on the 7100 block of Skidaway Road. The suspect tried to open a door on the building’s eastside. "The doors, however, were locked by employees prior to the suspect’s arrival, preventing him from gaining entry," police say. 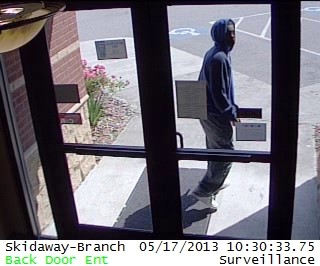 The suspect was described as a black male wearing a dark blue hoodie, baggy blue jeans and white tennis shoes. He is about 5-6 with a slim build. He fled the scene on foot traveling eastbound. No money was taken.

Anyone with knowledge of the gunman’s identity or location, or with any other information on the case is asked to call Crime Stoppers at (912) 234-2020 or text CRIMES (274637). Tipsters remain anonymous and may qualify for a cash reward. A confidential Tip Line also is open directly to investigators at (912) 525-3124.