They will both be on display this Wednesday from 3-5 p.m. in front of the Old County Courthouse on President Street between Drayton and Bull. 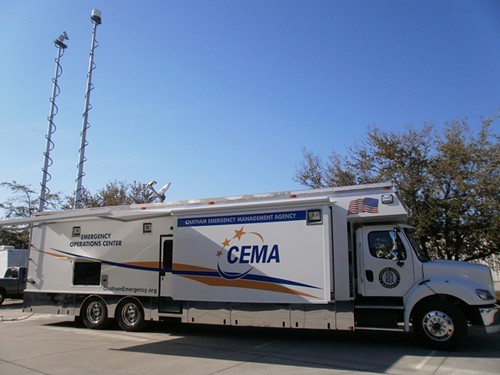 The completely self-contained mobile EOC "enables CEMA to position a forward command post for response to inter-agency emergencies such as the Sugar Refinery explosion, wildfires and Search and Rescue operations," CEMA tells us.

It can also be used to support special events like the Rock ‘n Roll Marathon and St. Patrick’s Day, hence the open house, uh, open trailer, this Wednesday.

The mobile EOC can operate for extended periods with either its self-contained generator or external power. It has a 48-foot electronically telescopic audio-video antenna for command and control operations and a live video feed from the Mosquito Control helicopter (which doubles as the police helicopter).

The Communications Trailer is equipped with a 24-inch mapping plotter and hi-speed color Laserjet printer; it also has four satellite telephones. Like the mobile EOC, the trailer has an electronically telescopic audio-video antenna for a live pilot’s-view-video from the helicopter.

The two vehicles will be used for the first time this St. Patrick’s Day weekend along General Macintosh Boulevard above the old Georgia Power building.

Both vehicles were fully funded by Federal grants, if you're wondering.